Even as the war unfolds “live” in real time, it is hard to comprehend the scale of the humanitarian costs for those in Ukraine. Estimates already suggest that over 2 million refugees have fled the country. As the war drags on, Ukraine will face a rising death toll, shortages of essential goods and worsening of the crisis. The methods of the Russian President, Vladimir Putin, are ruthless and include the use of banned weapons on civilians. It appears that Putin will continue to escalate forces and tactics to bring Ukraine to its knees and, sadly, a truce seems distant. Surging Ukrainian national pride and a willingness to fight for their freedom, argues for a prolonged and destructive battle. Putin’s willingness to use force to obtain his larger goal of rebuilding the former USSR is a threat the world now takes seriously.

Though we are in the early days of this conflict, Putin’s aggression has many geopolitical implications. Since the invasion began, market volatility has jumped as investors have flocked to safe assets like U.S. Treasuries. More recently, the volatility has further increased as world leaders have acted with a high degree of unison in applying layer upon layer of sanctions. Notable was the first ever sanction of a central bank which froze most of Russia’s foreign reserve assets. On Monday, March 7th, selling pressure accelerated as many countries openly discussed banning Russian energy imports, sending gas and oil prices soaring.

Although the current volatility raises the appeal for investing in commodities, long-term returns for commodities have been pitiful. Since 2000, the S&P 500 is up 354% while a broad basket of commodities is up only 24%. Commodities generate returns through price change only, while stocks compound earnings and dividends. Over time this growth in earnings and dividends is a powerful driver of returns and builder of wealth in client portfolios.

Energy prices are at the nexus between war and sanctions. While countries are trying to maximize the effect of sanctions, Europe is reliant on Russia for 40% of their energy. Germany has few options to source their gas other than from Russian pipelines. Prices for natural gas in Europe have soared and are trading at approximately 15x natural gas prices in U.S.

Historically, energy prices are cyclical, moving in tandem with economic growth and prices tend to fall sharply during recessions when demand slows. Wars in regions that produce energy typically cause energy prices to spike. These increases have historically proven to be temporary, except for the second Gulf War beginning in 2003, which was in the middle of a prolonged energy shortage. Prices tend to decline once supply chains and production levels adjust. Hence, these large price swings in commodities makes investment timing very difficult.

In addition to being significant world suppliers of oil and gas, Russia and Ukraine are also significant producers/exporters of important grains. As the chart below highlights, food prices have also risen to record highs.

From a U.S. economic perspective, the current invasion is likely to remain less impactful to domestic economic growth. While we do not want to minimize the human tragedy, over time, investment markets tend to follow “economic” events and, for better or worse, discount wars and other geopolitical events (see chart below). According to a Bloomberg survey of economists, global GDP estimates for 2022 have fallen from 4.5% to 4.3%, so economists are still expecting solid GDP growth. 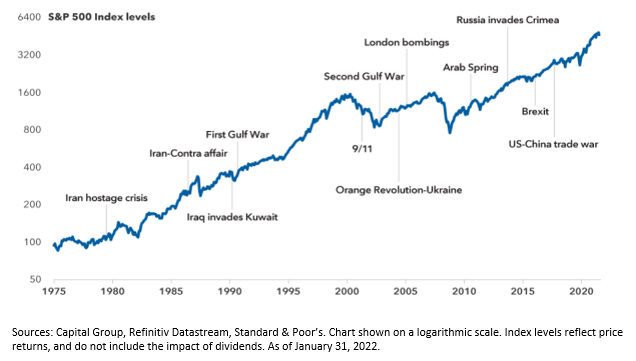 Our base scenario remains that U.S. economic growth will remain healthy and equity investors will be rewarded for not panicking. That said, this conflict is a major and evolving humanitarian crisis, which will affect energy and commodity markets, particularly in Europe. We remain committed to well diversified portfolios that should serve as a buffer as we navigate through these challenging times. We will continue to make modest adjustments in client holdings where fundamentals remain healthy, and valuations are compelling. Please reach out to your Crestwood team if you have any specific market or portfolio questions or concerns.